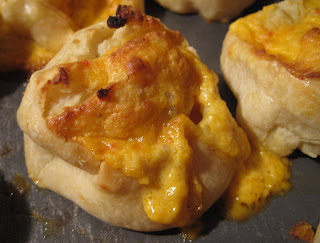 I thought Bruce Springsteen was talking to me in 1975 when he declared that "tramps like us, baby we were born to run." Two years later, I eagerly left New Jersey for college and adventure - not necessarily in that order - and, baby, I never looked back.

I returned many times, of course, in the years since, but only for fairly brief family visits. I not so secretly congratulated myself for making my life's accomplishments elsewhere - first Cleveland, then Indianapolis and, for the past 18 years, Raleigh.

But on those returns, and when friends and family from Up North came Down South to visit, I craved just one thing: Knishes.

I had no idea I had it so good by having access to so many Jewish delis in my childhood. The son of one of my mother's dearest friends even owned one. Mom stopped there faithfully every Saturday morning, after the ritual of having her hair set and starched. She returned home with a brown-paper bag stuffed with foods so pungently fragrant they beckoned us all to the kitchen like cartoon snake charmer.

There were kosher hot dogs, of course, tucked into steamed buns under piles of real sauerkraut. There were pastrami and corned beef sandwiches so big you could hurt your jaw trying to eat them. Dr. Brown's Cel-Ray for my dad and black cherry for me. And then there were the knishes, their leathery hides folded in foil and accompanied by small tubs of spicy brown mustard. Yes, please.

The nirvana of memory was never really matched in following years by freezer-case options or soulless pretenders sold to the unfortunates who simply didn't know any better. My brother David made a good faith effort to replenish my stock on a visit, only to realize at the airport that he'd left the precious cargo at home.

I made knishes once from a boxed mix, but there was no magic in that Manischewitz powder. I finally decided to try making them from scratch last year as a Hanukkah experiment. I'm just now facing my fear of yeast and pie crust, so the idea of making, resting and rolling out dough was intimidating. It took more time and effort than I expected, but the results were batamt - which sounds a little like Yiddish for "the bomb." In any language, they were delicious.

The yield was not quite like the ones I once savored, but their pedigree links directly to Arthur Schwartz, a bona fide knishmeister and self-titled "Food Maven." The crust is lighter but appealingly toothsome, and the potato-onion filling is eminently tweakable to incorporate leftovers or a creative urge.

Which brings me to the "fusion" challenge of this month's #LetsLunch posting, which today features personalized takes of cross-cultural cuisine by distinguished chefs, food writers and food lovers across the globe. The inspired theme comes from the just-published Cowgirl Chef: Texas Cooking with a French Accent (Running Press) by Ellise Pierce, a #LetsLunch founder.

It was important to me that my debut feature a recipe that boasted big flavor and reputable culinary chops. So to place Schwartz's New York deli-style knish firmly in a Southern terroir, I looked no further than Virginia Willis. This goddess of Southern goodness has a fine recipe for pimento cheese, and its vibrant color was just the thing to light the fusion fuse for this project.

So, nu? Go makes some knishes. Or, as my mother would have said, "What are you waiting for, an engraved invitation?" 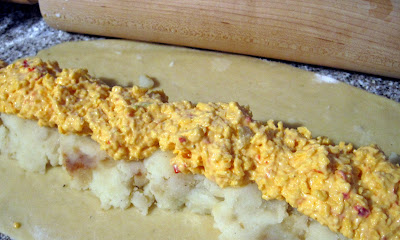 Knish Dough and Potato Filling
I followed Schwartz's directions closely to prepare the dough and filling. Allow plenty of time for the onions to slowly caramelize and attain maximum sweetness. I made narrow strips of dough as directed on my first try, which produced adorable bite-size knishes perfect for entertaining. For this batch, I divided the dough into thirds. Next time, I'm just going halve it for what I consider traditional-sized knishes. 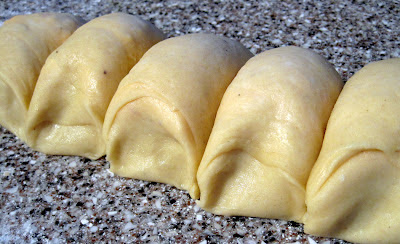 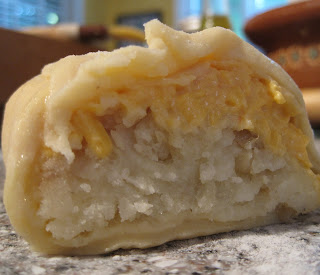 Pimento Cheese
Everyone in the South has a secret recipe for pimento cheese, but Virginia Willis' version is hard to beat. Do not use packaged shredded cheese, which is treated to minimize clumping. Creamy results are guaranteed only if you shred it yourself. Can you save some time (and knuckle skin) by putting the cheese in the freezer for about 15 minutes and using the shred setting of a food processor. 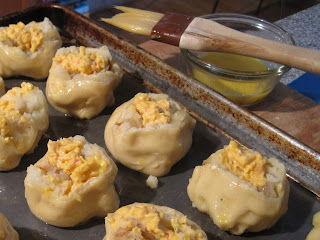 I used a a plump local spring onion instead of a Vidalia, a good splash of Louisiana Hot Sauce and a bit more mayo than called for. If you don't make your own and want extra points for going uber-Southern, use Duke's brand mayonnaise. Pimento cheese is best made in advance and chilled in the fridge for a few hours to allow flavors to fully meld.

Assembly and baking
Schwartz's recipe describes open-top knishes as "traditional," though I never saw one during my peak knish consumption years. My idea of traditional is squared and sealed, but I decided to give his version a try since I hoped it would create a somewhat volcanic result with oozing pimento cheese lava.

I was not disappointed. Indeed, a friend who admired the top photo said it looked like what he'd expect to find at the end of the rainbow. What a mensch.

I used the last strip of dough to make closed knishes - more rectangular than square, but more like memory than not. Whichever style you prefer, be sure to brush the dough with some egg wash to fortify the structure and give it a handsome finish. 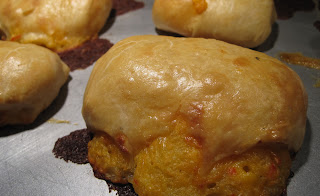 Try to let them cool a bit before diving in or you'll risking having molten cheese burn the roof of your mouth. I enjoy knishes drizzled with a little mustard - Gulden's Zesty Honey Mustard is a guilty pleasure - but they're also great straight.