Steven Raichlen will participate in a demonstration and book signing event at 6 p.m. July 25 at Fearrington Village in Pittsboro in celebration of his book, Best Ribs Ever: A Barbecue Bible Cookbook: 100 Killer Recipes. Tickets are $40 each and include samples of ribs, beer and an autographed copy of the book. For information, call 919-542-3030. 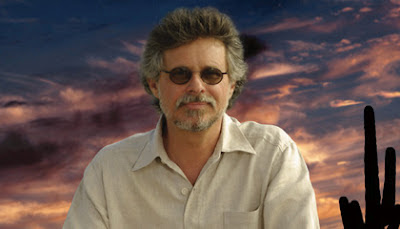 There are lots of foods called barbecue, but most North Carolina purists sit in the same pew when it comes to the holy trinity of whole hog, pork shoulder and wood smoke.

Steven Raichlen doesn’t mind sitting in the next row. After spreading the gospel of barbecue around the globe and teaching countless fans how to make it at home through his popular books and cooking shows, Raichlen remains devoted to a certain cut.

“If I were to pick one dish that epitomizes barbecue, that stands as the pin-up for it all, it has to be ribs,” said Raichlen, author of the new collection Best Ribs Ever (Workman Press).  “There’s just something so primal about it. Any food eaten with your bare hands, preferably outdoors, takes you back 1.8 million years ago to the whole king of the hill thing.” 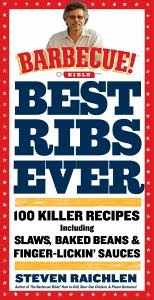 Raichlen credits the built-in flavor boost provided by marrow-rich rib bones and feels a bit sorry for those who deny themselves the pleasure that comes with the relatively high ratio of fat to meat.

“Hey, fat equals flavor,” he said, noting that barbecue is not a subject fit for calorie counting. “It’s extraordinarily versatile. I know people in North Carolina will disagree, but for me, it just doesn’t get any better.”

Raichlen is an ardent admirer of the Carolina ‘cue – he’s especially keen on Allen & Son, the celebrated Chapel Hill smokehouse that remains faithful to the low and slow method – but he thinks those who try to pass off electric- or gas-cooked meat as the real deal deserve a sort of barbecue ex-communication.

In his travels to research this and other books and broadcasts – he reckons he’s circumnavigated the globe at least a half-dozen times in search of barbecue heaven – Raichlen said he’s come across many exceptional cooks whose methods are rooted in the Tar Heel tradition of pit barbecue.

The owner of the Auberge Shulamit inn and restaurant in Rosh Pina, Israel, finally found the smokey flavor she wanted to feature after a friend from North Carolina came over and crafted a pit to cook meat. “She was very taken with this and tried it with goose, which is delicious,” said Raichlen, who wrote about the restaurant’s Smoked Egg Pâté in Planet Barbecue. “If you’re willing to broaden your definitions, you open yourself up to some amazing barbecue experiences.”

There are some places, however, that Raichlen just won’t go.  “Boiling, braising and microwaving – that’s just wrong,” he said, enumerating the three “heresies” defined in the book.

“Some people would argue that smoking low and slow is the barbecue analog of braising, but it’s different when you rely on natural juices to flavor the meat,” he said. “Braising the ribs in the oven then throwing them on the grill to brown them up is very different. Same goes for boiling or microwaving. You might make something very tasty, but it’s just not barbecue.”

Raichlen suggests that newbies start with the appropriately titled First Timer Ribs, a simply seasoned feast that explains step by step how to prep the meat and cook it to perfection.
Ever the barbecue missionary, he's hopeful that the recipes in Best Ribs Ever will encourage cooks to venture beyond the basics to enjoy exotic seasonings – and not just with baby backs and short ribs, but also lamb. One of his personal favorites is North African “Mechoui” of Lamb Ribs served with a spicy harissa.

Part of this dish’s appeal is the method of cooking with a rotisserie collar, which can be ordered online for most gas or kettle-type grills.

“I use one to cook a spit-roasted chicken at least once a week, and it’s an especially good way to cook ribs,” said Raichlen. “Honestly, it’s somewhat in the spirit of a Carolina pig pickin’, and who can resist that?”