Cookies of affliction, or how I finally made kichel

I have spent the last two weeks searching for the elusive Holy Grail of Passover recipes: egg kichel. 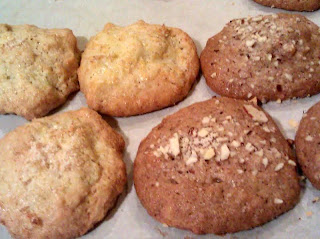 The humble holiday staple, at least where I grew up in the suburban wilds of New Jersey, made its grand appearance in every grocery store this time of year. Towering display of Manishewitz and Streits matzo, tins of macaroons and my beloved kichel filled me with a sense of happy expectation. The chocolate covered marshmallows and sugared jelly slices didn’t hurt, either.

Commercially prepared kichel has become a sad shadow of its former self. Those lovely light pillows of cookie, coated with a crackled sugar glaze and begging to be dunked in coffee – or Coffee Time, if you’re trying to get in touch with your inner shayna madela – appear to have come under the command of health freaks. What I found in stores this year, in much smaller and more expensive sani-wrapped boxes, were tiny salt- and sugar-free biscuits that look like they should be floated in soup. I feel sure even our dogs, Gimel and Olive (formally, Olive Bette), would sniff these and decline.

Feh, I thought as I wheeled my empty cart away. Better to have no kichel than those kichel.

As I wandered through the store, however, I started to think how easy it should be to make them yourself. They’re just airy puffs, after all. Some egg, oil and matzo meal, probably salt and definitely sugar. Easy, right?

Not so fast. After not finding recipes in any of my Joan Nathan or holiday recipe books, I did find a few online – but they were, well, weird. Some called for rolling the dough flat and cutting it into strips; others included up to a quarter-cup of poppy seeds.

“Poppy seeds?” said my brother Alan, an edge of horror in his voice. He’s both a Jewish doctor and a regular at his synagogue, so his disdain gets double points. “That I’ve never heard of.”

Next I sent pitiful, begging postings to any Jewish foodie I could think of on Facebook, and even tracked down several more from freelance articles posted in newspapers across the country. I felt confident and awaited a shower of recipes to fill my inbox, not unlike manna appearing just in time to sustain the Isrealites in the desert.

But lo, the majority of responses I received were on the order of “sorry, no, but great idea!” Adam Roberts of the amusing Amateur Gourmet had never heard of them and politely wondered if perhaps I meant kugel. Levana Kirshenbaum, who created a tantalizing chocolate-beet-coconut cake, got my hopes up when she referenced a terrific recipe in the Libuvitcher Cookbook – but she had no access to her copy. “Oy, so sorry,” she wrote. Grrrr.

When I typed that vague title into Amazon.com, it of course did not find her treasured book, which may well have been a Hadassah fundraiser. The search did produce a link to Amanda Hesser’s aptly-titled “Essential New York Times Cookbook.” I was proud to be among the first to snag a copy, but alas, even the venerable Times has lost interest in kichel.

Not surprisingly, though, Hesser wrote back promptly, recommending Food52’s “food pickle,” a terrific go-to resource for culinary stumpers. A regular there advised me to expand my search from kichel to kichlach, where I was assured there were multiple entries.

My excitement dimmed when I saw that nearly each entry was the same, literally – is it possible that there’s really just one Jewish grandmother left in the world? – and nearly all included the perplexing poppy seeds.

Alan had come to the rescue the previous week with a surprise kichel care package that truly ranged from the sublime (chocolate and cinnamon-sugar variations) to the ridiculous (salt- and sugar-free.) Amused to be part of the hunt, he is carrying the request to his cantor. In desperation, I decided to ask someone outside of the tribe.

I mentioned my efforts to a tech-savvy friend who suggested trying Google’s Canadian search engine. “They have a large Jewish community in Montreal,” observed Joey, a sometime Southern Baptist. “I was there once during Passover and they were really into it. Even the Coca-Cola was marked kosher for Passover.” 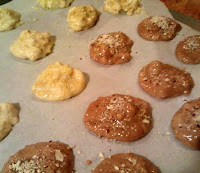 Joey was quite amused when he quickly found a kichel recipe credited to someone’s bubbie, and photos of another that really look like the real deal. “That took about two seconds,” he said, declaring his abiding faith in his phone’s 4G speed. “And I’m not even Jewish!”

The funny thing here is that the bubbie found by the Canadian search engine was from Nashville, Tenn., and a photo showing gluten-free kichel credited to Anshe Emeth Sisterhood Cookbook came from Mrs. Louis Kugelman of Youngstown, Ohio. Go figure. I’ve tweaked it a bit further, but here is the original link.

They’re not as light or as crispy as I remember, but for cookies of affliction, they’re pretty damn good.

Beat egg whites until foamy and soft peaks begin to form; add sugar gradually and beat until fully incorporated. Add about 1/3 egg whites to mixture, folding in to lighten batter, then fold in the remainder.

Divide batter among two bowls. In one, add lemon extract and stir. In the other, add almond extract and cocoa powder, blend well.

Drop from a teaspoon about an inch apart onto a cookie sheet lined with parchment paper. Sprinkle lemon cookies with zest-sugar and the chocolate ones with almond-sugar. Bake for 20 minutes and then reduce the heat to 300° F for an additional 15 minutes.

Cool on a rack and store in an air-tight container, if they last that long. By the time I got to the kitchen to box them, most were gone.
Posted by Unknown at 10:49 PM