We arrived on Edisto Island, South Carolina, around 3pm Sunday and checked into our condo, which is on the quiet sound side. Actually, the entire island is very quiet. We are sharing it will just a scattering of like-minded folks who know how lovely the beach can be in fall. 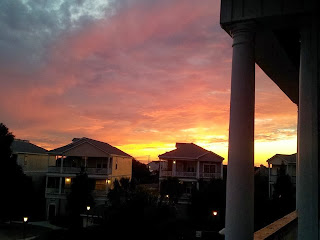 We were given a map of the surroundings by a cheerful concierge, who notes that the island fish market is directly across from check-in. Tim, not a beach lover (too much sand), brightens immediately.

We decide to take a quick drive through town before checking out the fresh catch. Post-season business owners have apparently rediscovered faith and family as just about everything is closed. Tim is not impressed. "There's not even a coffee shop," he says.

We pull into the fish market's parking lot, relieved to see another car already there. The sign on the door reads "Open 7 days a week, 9-6."

"I did the same thing," I hear a woman say as my hand flies off the handle of the locked screen door. "See you at the Pig." 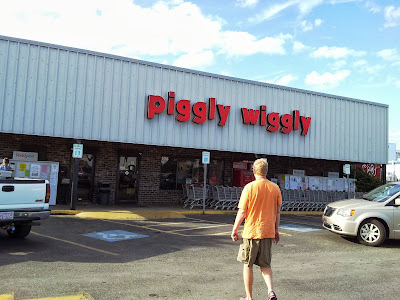 There is a tiny Piggly Wiggly on Edisto, the sole haven for disappointed new arrivals. Prices are reasonable but options are few. I get in line at the deli while Tim hunts for bread and a bag of lemons.

A fellow steps past the perimeter of the deli area and looks around as if trying to determine who is in charge. The woman helping me throws him a look.

"Do you sell mullet?" he asks hopefully. "No, shug," she answers, pointing toward his feet as he steps back. "No fresh fish."

"I thought maybe you could sell them," he says affably. "I've got about 100 gill-net caught mullet in my truck. Nice big ones. You want any, just to take home?"

"Jumping mullet?" I ask, incredulous at the offer. "Can I have two of them?" 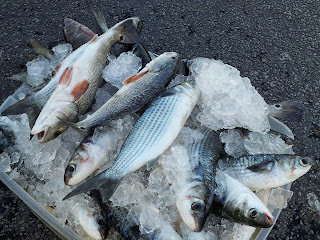 And so began our exceptional $7 dinner and breakfast, which Tim dubbed Twice Murdered Mullet.

After confirming that we have access to a grill, Tim returns to the market to get charcoal. I go online to see if I can find a how-to video on how to reduce a whole fish to cookable parts. The first one, posted by someone named "boobster1969," shows him trimming, filleting and skinning five fish in under three minutes. The next one is more informative, which actually proves to be more intimidating.

Our accommodations include a reasonably well-stocked kitchen and a set of serrated knives, which I normally use only for slicing tomatoes or bread. I watch the video again, keying in on how to release the hard scales and reveal the shiny, blue-tinged skin. I feel growing confidence as I watch him effortlessly slip the blade through the belly, gliding over the bones, to release a perfect fillet. How hard can this be?

I pour myself a glass of wine. I find the cutting board and a pair of kitchen shears to snip away the fins. I reach into the bag to pull out a fish; we actually have three. Each one slips out of my grasp, several times, before I manage to get it on the board. Scales ricochet like thrown poker chips. The fins do not surrender as easily as I expect from the video. I will spare you the gruesome details of dispatching the heads, but suffice it to say that the I could not stop thinking about the movie "Fargo." 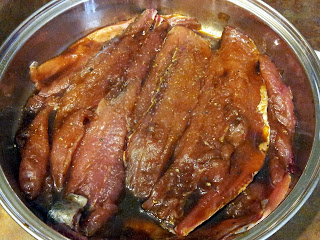 Releasing the flesh proves rather challenging. I would like to blame the unfamiliar knife, but what I do to those lovely fish borders on sin. Instead of appetizing fillets, we mostly had slivers and chunks.

At home, we marinate mullet in a mixture of soy sauce, garlic, ginger, pepper flakes, salt and pepper, and a glug of molasses. It creates a deep, dark sweet-and-savory flavor perfect for a smoky grill. Since we did not want to invest in all that, however, we opted for bottled teriyaki sauce.

Tim had the coals just right, but it soon got too dark to see. The fish was perfectly cooked but reduced to shards. 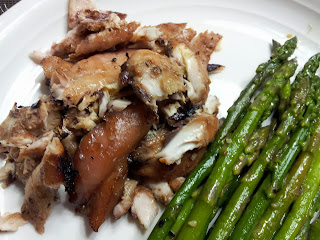 "Think of it as fish bits," he says, refilling our wine glasses for dinner. "You murdered it once, then I did it again."

Accompanied by blanched fresh asparagus finished in butter and gingered sesame seeds, it was an excellent meal. The leftovers were diced and cooked with eggs for breakfast. Counting all purchased ingredients (including charcoal), we spent about $7 on our first two vacation meals.

We'll be going back to the Pig - if not for more free fish, at least for new T-shirts. Hard to imagine a better souvenir.
Posted by Unknown at 11:04 PM No comments: