Another chef with impressive credentials has chosen Raleigh as the location to open a new restaurant.

Teddy Klopf will be executive chef at Provenance at SkyHouse, a restaurant and bar in the new high-rise condo and retail complex under construction at 308 S. Blount St. He left a year-long stint of cooking at Herons at The Umstead this month to focus on developing his creative concept and building his team for a scheduled October opening.

The 31-year-old chef has ambitious plans for Provenance, which will start with breakfast and lunch service in the downstairs bar. Upstairs, Klopf will feature a "subscription" dining option, which he says will be tailored to preferences of individual members, and themed pop-up style dinners on weekends. The latter will be something like Next in Chicago, where fans follow social media postings to jump on ticketed events.

"There is nothing else in the area doing what we will be doing. It's for people who are looking for a little more in their dining experiences," says Klopf, noting that the tasting menu-style meals will change daily based on seasonal availability. Themed events under consideration include a Don Quixote series, which will pair Spanish "wine and cuisine with elements of the fantastical," suggesting the high-tech gastronomy of the famed El Bulli.

After working as a pastry chef and certified sommelier from 2005 to 2008 at a handful of award-winning restaurants in Sante Fe, Klopf enrolled at the prestigious Culinary Institute of America. The experience allowed him opportunities to learn at top New York City restaurants, including Thomas Keller's Per Se, Eric Ripert's Le Bernadin and Daniel Humm's Eleven Madison Park. After he graduated in 2011, he cooked for two years at McCrady's, one of Sean Brock's Charleston restaurants.

"I've had a lot of extraordinary experience to learn in great kitchens," Klopf says. "But there was no question for me that Raleigh was the place where I wanted to have my own restaurant."

"I did my homework and felt that my concept would be a good fit for the area. After a year at the Umstead, I'm quite certain about it," he says. "It's a very exciting time for the food scene and the sheer bounty and excellence of local goods is incredible. In my estimation North Carolina offers one of the best and healthiest agricultural centers in the country."

This post first appeared in Indy Week.
Posted by Unknown at 4:37 PM No comments:

When North Carolina troops return from military deployments, they often crave the familiar flavors we take for granted. After an extended diet of ready-to-eat meals, few things taste better than a grilled burger dressed with Duke’s, a second serving of strawberry shortcake, and an ice-cold beer.
For a handful of enterprising veterans, beer has become more than a sip of freedom. It’s their livelihood, earning them opportunities to translate leadership skills gained through service to our country into the creation of quality craft brews.
Since April is North Carolina Beer Month, it’s good to note that at least six breweries owned or operated by veterans have opened in North Carolina in recent years.
Beer Army Combat Brewery is located in New Bern, just down the road from the Marine Corps Air Station Cherry Point. Among its award-winning beers are Fire in the Hole, an Irish-style red ale, and Heroes Never Die!!!, an American-style IPA. At The Mash House Brewing Company in Fayetteville, a double IPA recently debuted with the name Intrepid, a salute to the courageous fighters at Fort Bragg. 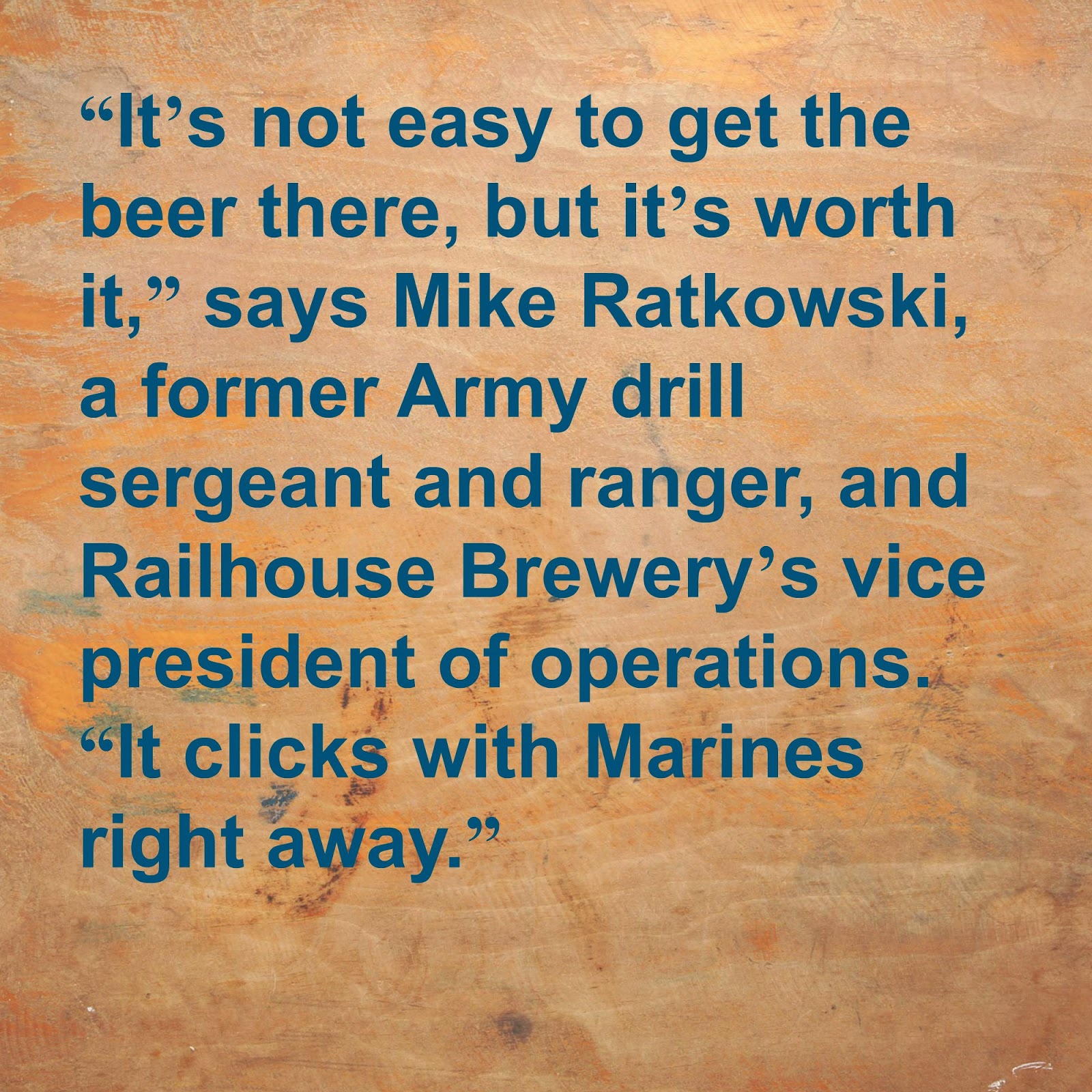 Railhouse Brewery in Aberdeen has KA-BAR, a brown ale named for the combat knife adopted by the Marines during World War II. The brew won a gold medal at the 2013 International Craft Beer Awards. Sold across North and South Carolina, it’s also popular around Camp Mujuk in South Korea, one of the largest Marine Corps bases in the world, offering a taste of home.
These military brethren caught the craft-brewing bug the same way most of the state’s top brewers did: by making small-batch beer at home. But there is more that unites them.
“They all seem to agree that their military training gave them the know-how and confidence to become craft beer entrepreneurs,” says Margo Knight Metzger, executive director of the NC Craft Brewers Guild.
And they all observed a lack of local breweries in friendly territory near the state’s many military bases. Several veteran-led start-ups were in discussion when Railhouse led the charge and was established in December 2010. Not far from Fort Bragg and Fayetteville and near Aberdeen, Camp Mackall Army Base is where soldiers train to become members of the elite U.S. Army Special Forces.
Ratkowski's business partner is Brian Evitts, a former home brewer who served as a nuclear propulsion chemist in the Navy. “That’s why Brian is the CEO and brewmaster,” quips Ratkowski. “We figured if he could handle nuclear physics, making craft beer on a commercial scale should be a breeze.”
Ratkowski says the structure and rigor of military service develops job-ready skills that are essential to success in the public sector.
“None of us are afraid of getting our hands dirty,” agrees Vernardo “Tito” Simmons-Valenzuela, a former Army medic turned brewmaster at Dirtbag Ales in Hope Mills. “Everything at our brewery, except what we’ve needed commercial permits for, we’ve done ourselves. Lead-from-the-front and be-the-example definitely came into play,” he adds.
Micah Niebauer, co-founder and CEO of Southern Pines Brewing Co., says his partners have a clear sense of mission and experience that lets them “adjust on the fly as we operate the brewery.”
With support from a Patriot Express Loan available only to military veterans, Niebauer created the company with fellow Green Berets who served in his unit. “From our perspective,” he adds, “opening a business and becoming an entrepreneur is part of the American dream.”
Niebauer’s team calculated that the Sandhills could support two breweries. Southern Pines Brewing is located along the same rail line as Railhouse Brewery, even having used Railhouse’s equipment before acquiring its own gear. More comrades than competitors, the two recently collaborated on a black IPA called Ties That Bind.
Like members of the armed forces, microbrewers say that they are stronger when they pull together. “We’re all on the same team,” Ratkowski says. “Our goal is to share our passion for craft beer. We think it’s more important for people to know and buy from their local brewer than some big faceless corporation.”
Richard Young developed his brewing skills on the West Coast before landing at Fayetteville’s The Mash House last November. Once a member of the distinguished 7th Infantry Division at California’s Fort Ord, he has fond memories of time spent training at Fort Bragg with the 82nd Airborne.
“It makes sense to me do something I love in a community that I really appreciate,” says Young, who started brewing beer in junior officer quarters at Fort Ord. “Technically, it wasn’t quite legal,” he admits, “but let me say this: Up and down the halls, no one was complaining.”
Young is working on a new beer that will be sold to raise money for a nonprofit that assists members of the armed services. “We’re testing a few with our customers now,” says Young. “Once we settle on a winner, part of the proceeds will go straight to helping veterans.”
There’s little about the upscale taproom or list of classic Belgian-style ales at Charlotte’s Sugar Creek Brewing Company to suggest that it’s run by veterans. “We don’t market our military experience,” says CEO Joe Vogelbacher, a graduate of Kings Point Merchant Marine Academy and current member of the Naval Reserve. His partners include a Marine Corps infantry machine gunner who served in Iraq and Afghanistan, a Navy submarine electronics technician, and a former nuclear engineer with Newport News Shipbuilding.
“When people learn our story, they come and introduce themselves,” adds Vogelbacher, whose brewery is not far from the Air National Guard 145th Airlift Wing. “Birds of a feather, right? We all want to see people who served their country succeed when they get back home.” 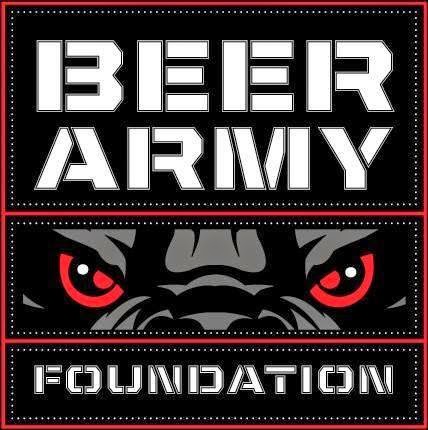 With a logo that depicts an American eagle with a wild-eyed Devil Dog on its chest, there is no mistaking Beer Army Combat Brewery’s pedigree. The image combines the motivational nickname for the Marines with the look of Beer Army founder and “General” Dustin Canestorp’s beloved late Doberman. He says it’s a constant reminder that making and selling beer is a means to doing good in his community.
“Philanthropy is the reason I started this,” says Canestorp, a retired Marine who has directed more than $90,000 to local charities through his nonprofit, Beer Army Foundation. “We are part of the fabric of our community. Our mission is to help.”
Canestorp was inspired to create the brewery and the foundation following the combat death of a close friend. This year, he will expand the foundation’s reach by providing small scholarships through events proceeds and sales of logo goods. For a college student in need, it’s an entirely different way to think about “beer money.”
“I believe education is key to solving a lot of our country’s problems,” says Canestorp, who put himself through college by joining the Marines. “If our foundation can help a kid get ahead, become successful, and give back to their community, I’ll be very happy.”
Application information will be posted on the foundation’s website, BeerArmy.org.
Military branding also plays a big role at another veteran-owned and operated brewery. Being called a “dirtbag” might not strike you as a compliment, but Simmons-Valenzuela says fans of Dirtbag Ales recognize the intended fellowship.
“We call people dirtbags when they’ve kicked around” various deployments, explains Simmons-Valenzuela, who met his business partner and fellow Army medic Gerald Montero while they were assigned to a small hospital in Baghdad, Iraq.
Dirtbag also brewed beer at Railhouse before opening its own production site. Railhouse’s Ratkowski says Dirtbag is making one of the best Kölsch beers in the state. It’s on tap at super chef Ashley Christensen’s popular Beasley’s Chicken + Honey in Raleigh.
Simmons-Valenzeula credits an unused gift for Dirtbag’s success. He and Montero returned to North Carolina after their deployment, buying houses next door to one another. He gave Montero and his bride a beer-making kit as a wedding gift, but a year later, it was still in the package.
“I took it back, and I guess the rest is history,” Simmons-Valenzuela says. “There’s just no reason to let good beer go to waste.”
This story first posted in Our State Magazine.
NOTE: The Sun Journal of New Bern reported that Beer Army has closed. Founder Dustin Canestrop says he hopes to continue the work of the Beer Army Foundation.
Posted by Unknown at 3:31 PM 2 comments: