Growing up in Northern New Jersey, there was no sign more certain that Christmas was nigh than the arrival of the singing choir boys down the street on our neighbor’s front lawn.


The stiff plastic trio, illuminated from within, cast a comforting glow on the snow-covered lawn of the Lyng family home – where Billy, the eldest son, was the acknowledged dreamboat among the little girls who lived nearby. We’d gather to stare at the angelic faces as Christmas songs played on an endless loop, hoping that Billy, like St. Nicholas, soon would appear.
Holiday decorations have long since gone high tech, but there still is something undeniably charming about driving around and seeing the lights of the season. For those who still crave such magic, the Tanglewood Festival of Lights in Forsyth County is celebrating its 22nd season of presenting a drive-through display.


Long lines of vehicles, many filled with excited children, inch through the park’s rolling lanes to enjoy what is described as one of the Southeast’s largest holiday light shows. While some certainly are more spectacular than others, 83 named displays dot the route.

(If the possibility of a two-hour wait might spoil your festive mood, plan to be in line when the park open at 6 p.m. You can dial into a local radio station to hear holiday tunes, but a word to wise men and women the wheel: come prepared with your own favorites.)
After gliding through a series of twinkling arches, viewers are welcomed by perhaps the most fabulous sight of all – a series of sparkling snowflakes strategically placed so as to create a sense of driving into a winter wonderland. Squirrels chase nuts up a tree, skipping from limb to limb before scooting down one on the other side of the lane. Reindeer similarly sprint overhead. Later, roll down the windows to hear jingling bells as you ride past hundreds on display. 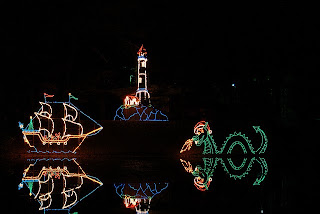 If you’ve been to one of these spectaculars before, many of the visions will be familiar. There is a silly slip-sliding penguin and fire-snorting sea serpent, a grand garden of poinsettias and a serene nativity scene. Given the park’s proximity to Old Salem, there also is a shimmering Moravian star. And on the assumption that other celebrants might find the route appealing, Hanukkah and Kwanzaa displays are given token acreage.
There is seasonal kitsch aplenty to keep a carload of revelers amused along the drive, and those wanting a keepsake or snack can visit the concession area at the Red Barn. Despite the demands of their busy schedule, Santa and Mrs. Claus will be on hand to greet children and accept last-minute additions to wish lists.


The Tanglewood Festival of lights will remain open from 6-11 p.m. nightly (except for Dec. 25) through Jan. 1. For admission costs and other information, call 336-703-6400 or visit http://forsyth.cc/parks/tanglewood/fol/.
Note: My tour of Tanglewood Festival of Lights was arranged by Visit Winston-Salem. Additional posts about things to do in Winston-Salem will follow. For information about other area events and activities, call Visit Winston-Salem at 336-728-4200 (toll free, 866-728-4200).
Posted by Unknown at 11:48 AM No comments:

Once home to desolate storefronts and a handful of struggling shops, the area that bridges the established Oakwood and Mordecai neighborhoods near downtown Raleigh transitioned during 2013 into the thriving business destination many always believed it would become.

It even attained its own destination name: North Person.

Several new businesses have opened in the low-key district in recent months, including a new Niall Hanley pub—The Station Bar, located in a former gas station on Person Street—in November. This week, assuming all permits are finalized, the long-awaited second location of Wine Authorities will open around the corner in the Person Street Plaza on East Franklin Street.

At least three additional openings are anticipated for early 2014, including the previously announced Person Street Neighborhood Bar at the plaza. John Holmes of Hobby Properties, which manages the plaza, confirms that a new restaurant will be announced in coming days.

The third new venture will be a "speakeasy cantina" set to debut in March on Person Street next to PieBird, which has enjoyed steady growth since it opened in 2011. The long-vacant location served as a pop-up ice cream shop for a few months during the summer.

"We had been looking at spaces in the neighborhood for a long time and we jumped when we learned this was available," says Lily Ballance, who will operate the as-yet-unnamed bar with her husband, David Ballance. The Ballances signed the lease three weeks ago.

The couple was formerly involved with Calavera Empanadas and Tequila on South Blount Street near City Market. Since the new site is not large enough for a kitchen, Ballance plans to collaborate with PieBird owner Sheila Duncan to provide empanadas and other nibbles.

"I grew up in Mexico City and want to try to re-create the feel of the great neighborhood bars there," says Ballance, who currently works at Five Star, an Asian restaurant in the warehouse district. North Person "is so cozy and great. The people are so friendly and supportive. There's a buzz starting and we really feel like it's the place to be."

A decade ago, before he settled on Durham for the first Wine Authorities store, Craig Heffley considered launching his business in the North Person area.

"I have a friend who lives in Oakwood, and I always through it would be a great place for a wine store," Heffley says. A year ago, when he was scouting locations for a second store, he drove by Person Street Plaza and saw a sign seeking tenants. "I stopped the car and called right away," he says. "We're thrilled that the emphasis is on small, independent operations that serve the community."

Niall Hanley agrees. "Our goal is to cater to the neighbors," says Hanley, who created a large patio at The Station with freestanding outdoor fireplaces to offer the neighborhood a communal living room. His chef, Scott Jankovictz, worked at the now-closed Market Restaurant. "I think you will see a scene being developed here that will be strongly controlled by the neighborhood, which is fine with us. That's what builds longevity."

At least one North Person start-up already has gained national attention. Slingshot Coffee, which sells hand-bottled, cold-brewed iced-coffee beverages, has gone from off-hours production in the former Market Restaurant location on Blount Street (now home to the very popular Stanbury restaurant) to its own space within Oak City Cycling on East Franklin. Its products have been singled out for praise by Southern Living and Imbibe magazines and included in upscale holiday gift guides promoted by Real Simple, Gear Patrol, Time Out New York and Provisions, the online retailer affiliated with Food52, a respected cooking resource.

After working around the clock for months, owner Jenny Bonchak finally gave notice at her day job last week.

"I'm still the only employee, although I do have some help with local deliveries and in-store tastings," says Bonchak. "I will be going full-time in January and I couldn't be more excited to take this next step."
Posted by Unknown at 11:32 AM No comments: