Let’s Lunch: 'Go For the Gold' with Honeybell Chess Pie

It’s not an official Olympic sport, but there is a major competition occurring right now in North Carolina over the relative merits of pie and cake. There’s no debate about the outcome at our house, where we are totally Team Pie.

Our State magazine is about to close out Round 1 of its bracketed Pie vs. Cake contest, which pits favorite Southern pies and cakes in a contest reminiscent of college basketball’s road to the Final Four. One of the contenders is the beloved Lemon Chess Pie, which I feel is sure will overtake its lesser opponent of Chocolate Chess Pie.

My favorite recipe for Lemon Chess is found in Southern Pies, a wonderful collection by my friend and fellow Let’s Luncher Nancie McDermott, who is featured in the special February edition of the magazine for this and a must-have companion book, Southern Cakes. McDermott’s recipe is based on the one made famous by Chef Leah Chase of the famed Dooky Chase restaurant in New Orleans. (I have a story in the same issue about Raleigh's wonderful PieBird restaurant.)

With a creamy filling and crispy crust formed by cornmeal that climbs to the surface while baking, Lemon Chess was my choice for birthday pie last month. However, delicious as it is, I was concerned that it might not have enough color to meet the "Go For the Gold" theme of this month's Let's Lunch posting.

Tim and I were lucky enough to receive a box of Florida Honeybells as combined birthday gift. Due to unseasonably cold conditions, these hybrids of the Dancy tangerine and Duncan grapefruit are not as spectacular as past examples, but their bright color inspired me as a substitute for standard lemon juice and zest.

The result was lusciously golden – or maybe bronze, if you’re not feeling as charitable. If you don’t have access to Honeybells, choose whatever orange variation is at peak flavor from your market. 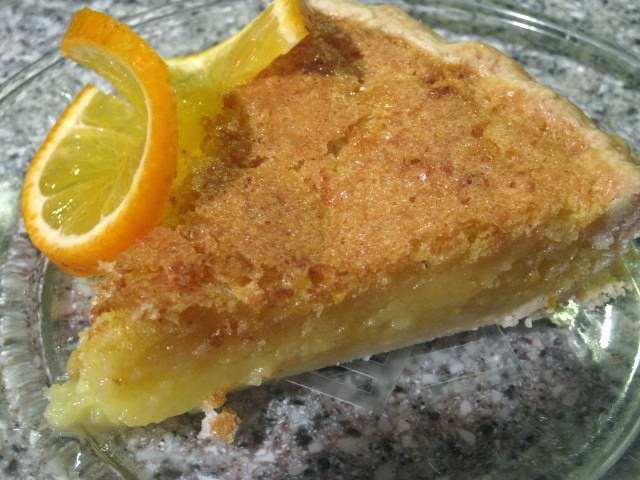 Heat the oven to 350 degrees F. Line a 9-inch pie pan with crust and then crimp the edges decoratively.

In a medium bowl, combine the sugar, cornmeal, flour and salt. Stir with a whisk to blend. Add the eggs, butter, melon juice, evaporated milk and zest. Using a fork or whisk, mix well, stirring and scraping to combine everything evenly into a thick, smooth filling.

Pour into the piecrust and place the pie on the bottom shelf of the oven. Bake until the edges puff up and the center is fairly firm, wiggling only a little when you gently nudge the pan, about 45 minutes.

Place the pie on a cooling rack or a folded kitchen towel and let cool to room temperature.
Posted by Unknown at 8:55 AM