A most practical obsession: on canning with ‘Mrs. Wheelbarrow’s Practical Pantry’

I sometimes feel there should be a special group for people like me – people who go to farmers markets and imagine all those peak season fruits and vegetables framed like lasting, fragrant and edible snapshots in glass jars in the upstairs closet, ready to be opened for off-season satisfaction that less-driven mortals will never know. 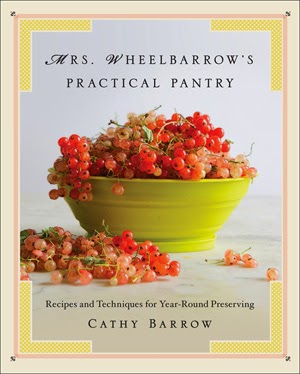 Yes, as I stand on my feet for endless hours because I could not resist the bargain box of local strawberries – or perhaps peaches, corn or okra – I imagine that others envy my industrious nature, my ability to convert fleeting flavors into preserves and sauces and pickles that will conjure sunshine on the darkest winter day. I keep count of my filled and empty jars with the sincere enthusiasm of an accountant, knowing whether I’ll have enough jam to give to friends at the holidays and enough sauce to last until tomatoes reappear.

Hi, I’m Jill. I am an obsessive canner.

It is a relief to know there are many others similarly affected by a one-time hobby that has grown such that my husband feels compelled to tell neighbors – who sometimes spy me through the kitchen window making just one more batch when most sensible people are deep in dreamland – that we are adequately stocked in the event of a zombie apocalypse.

My insistence that my penchant is practical, providing us the resources for both flavorful meals and appreciated holiday gifts, is a welcome and recurring theme of Mrs. Wheelbarrow’s Practical Pantry: Recipes and Techniques for Year-Round Preserving, the long awaited book by Cathy Barrow (W.W. Norton).

I have been following Cathy’s eponymous blog for years, having discovered it through an online search for a canning advice, as well as her articles in the New York Times and Washington Post. I have made more of her reliable recipes than I can count and, after years of likes and tweets and direct emails – which include almost as much personal news as canning tips – am proud to call her my most cherished virtual BFF.
I was thrilled to be invited to be a member of the Practical Pantry Posse, each of whom tested several recipes that made the final cut. (I still marvel at seeing my name next to these culinary luminaries in the book's kind acknowledgments.) I made a handful in the water-bath and pressure-canning chapters which, like others on preserving meat and fish and making cheese, include bonus recipes in which your projects will become a starring ingredient. As I wrote in my feedback forms, I found Cathy's recipes to be practically omniscient, providing expected yields and describing changes in consistency and appearance with reassuring accuracy.


Among my favorites are the Double Strawberry Preserves – which combines juicy fresh berries with intense dried ones; the tweaked final version is even better than the original – Strawberry Mango Jam, and the surprisingly simple Rugelach, in which any jam or preserve may be used. Her Whole Cranberry-Raspberry Sauce (see below) will surely make its debut at Thanksgiving and I plan to take advantage of pear season to make her Caramel Pear Preserves. The latter is a pectin-free version of a 2010 recipe posted to her website, which takes its inspiration from French canning expert Christine Ferber.

I also tested her exceptional Homemade Ketchup, which makes great use of other canning projects, including Tomato Puree, Plum Jam or Grape Jelly, Garlic Dill Pickles and Hot Sauce. I was tasked with preparing it with comparable store-bought ingredients, in case users wanted to substitute anything they did not have in their oh-so-practical pantry. With 18 ingredients and four hours of active cooking time, it may strike some as intimidating. But give it a try. You’ll quickly discover why, in our house, we call it Super Ketchup.

The only recipe I tried that did not work was one in which I requested the chance to experiment. After hunting for goat’s milk and finally finding it in a portion larger than what was needed, I decided to see if I could successfully make a double batch of Cajeta, Mexico’s tangy version of cinnamon- and vanilla-infused caramel.  Many canning recipes do not work when doubled, and unfortunately it’s true of Cajeta. After nearly five hours of slow bubbling and occasional stirring, the promising sauce suddenly and irreparably seized up. Spoonfuls before that tragic moment hinted at the lush flavor that should have been; the next day, I sadly scraped the sugary mess into the trash. Lesson learned.

Cathy’s publisher permitted recipes testers to share a recipe in a series of blogs to be posted today, which marks the official release of the book. You’ll find the posts online by searching for the hashtag #PracticalPantry. I am including her Whole Cranberry-Raspberry Sauce below, but if you’d like to peruse all of Mrs. Wheelbarrow’s Practical Pantry, enter a comment below by 5pm Friday, Nov. 14. A winner will be chosen at random to receive a copy of the book.

Over the years, I've heard many people complain about the horrid canned cranberry sauce they were served as a child. I have no such memories. These same people initially shun my glistening, ruby-red cranberry sauce, but quickly revise their thinking after just one taste. Tangy, sweet, fruity in November, when many fruits are only a memory, this is a welcome addition to any holiday meal.
If you feel the need to serve this as a mold, as though it had slipped from a can, just run a palette knife around the inside of the jar and slide the cylinder into a relish dish.


The sauce is shelf stable for 1 year.

REMINDER: Be sure to submit a comment below by 5pm Friday, Nov. 14, if you would like a chance to receive a free copy of Cathy Barrow's Mrs. Wheelbarrow's Practical Pantry. The winner will be drawn at random and notified by email.